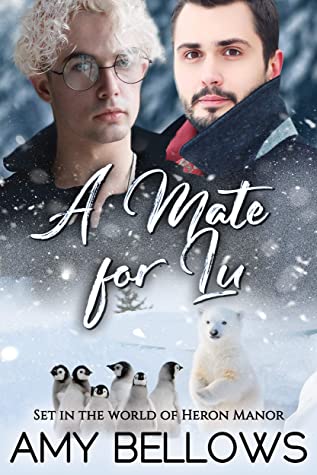 Two single dads. One accidental pregnancy. Many, many shifter children.

Sam’s mate died four years ago, and penguin shifters mate for life. Sam is never allowed to love again. Even when he meets a kind and beautiful omega who his three children gravitate towards.

After working with Lu for a year, Sam has fallen deeply in love with him. And Lu’s feelings for Sam are painfully obvious.

Caught between the desires of his heart, and the expectations of his culture, Sam must decide what he’s willing to pay to reclaim his own happiness.

I remember Lu from A Home For Ben (#3 in the series) but I admit to having to skim over that book a little to get a feel for him and some of the other characters again. A Mate For Lu actually takes places while that story is going on. The last book was about Axel, Cyrano, and Ben. Axel is Lu’s brother who’d been banished for beating up Lu’s daughter’s alpha dad when he abandoned his omega and child.

Lu, a bear shifter, is a single father working hard just to make ends meet. A freelance artist, he’s been working with Sam on a children’s book on and off for the past year. Sam, a widowed father of three, is a writer. Sam, unlike Lu, is comfortable enough financially. He has three children, the oldest being almost thirteen. Sam is a penguin shifter. Penguins mate for life, meaning that once he lost his mate he was destined to be alone. This has been drilled into him since birth so after losing Allen (his mate) he never sought out companionship or sex with anyone else. That doesn’t mean he doesn’t want both. He does. He just knows that if he acts on it he’ll be cheating on Allen.

But there’s something about Lu that brings out emotions Sam hasn’t felt in a long time. Even so, he’s very adamant about not acting on it.

It’s good that this is the last time we’ll see each other. I don’t know how much longer I can pretend that I don’t feel something for him. 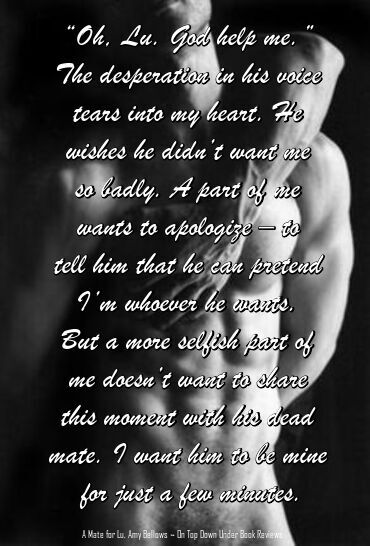 For the first half or so of this book I was frustrated. Sam finally gave in and had sex with Lu, who’d long had feelings for him. The ‘L’ word is said rather quickly but then Sam reminds Lu that they can never have any type of relationship. They’d seriously just had sex for the first time. Lu’s feelings (obviously) got hurt even though he knew going in how it would be.

I’m such a fool. What did I expect would happen? That Sam would magically fall in love with me, when he’s clearly never going to date again? I always want men who don’t want me back.

“I don’t know if you’ve noticed, but alphas don’t want me for much of anything, let alone a real bond. The only reason why a decent alpha like you is in my bed is because I didn’t ask anything from you but a quick fuck.”

I felt really bad for Lu. He’d already been hurt by one alpha who abandoned him and here he was allowing another one to hurt him.

Being angry with Sam is far better than pining after him. What an asshole. Going on about how he “doesn’t do casual sex” after reminding me over and over again that he can’t be with me, all the while sticking his dick up my ass. What kind of self-righteous nonsense is that?

Sam wants more with Lu and finally – after advice from another penguin shifter who’d lost his mate decades before – gets to a point where he can’t walk away. I loved the friend, Ed. He pulled no punches with Sam and didn’t allow him to wallow in self-pity over his late mate – the late mate who would’ve wanted Sam to be happy, not alone for the rest of his life.

“Are you really willing to neglect your mate because you’re afraid of what people will say? For Ice’s sake, Sam. Grow a pair.”

Taking a second mate is more than frowned upon in the penguin community. It’s simply not done. Even so, he and Lu talk about it and they know they are mates.

There’s a thing with Allen’s pebble that’s pretty important to the story but I won’t go into all that in this review. It would only confuse anyone who hasn’t read the series.

So, Lu and Sam are mates. Great, right? Not really, and this is where I had a serious problem with the story. They could love each other, have loads of sex with each other, but only if Lu agreed to keep things quiet until after Sam’s youngest child’s Pebble Gifting Season. We’re talking around 15 years.

I’m not a fan of ‘dirty little secret’ story lines and I felt that Lu agreed to it too easily.  He eventually realized he wanted more, but until he got to that point I didn’t have a whole lot of respect for him. He was willing to settle for less than. Those types of characters drive me crazy because they come across as too needy. It kind of reminded me of ‘the other woman/man’ scenario. Sam wasn’t even willing to tell his own children. The children loved Lu. It’s when Lu realizes he deserves more than hiding out from the world – and he’s willing to walk away from Sam – when Sam finally does the right thing. It’s a good thing, and very good timing, because Lu is pregnant. Had Sam only decided to stay after finding out about the pregnancy my rating would be lower. He found out after. 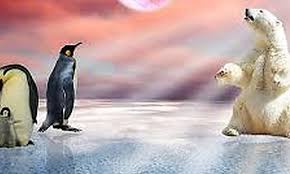 The Mpreg in this series is unlike any others I’ve ever read. My favorite part about all that is the ‘nesting’ that each pregnant omega dad does leading up to the birth of the child. It usually involves lots and lots of torn up pillows. 🙂 Along with the pillows are other things that make them feel comfortable, like at home. The nesting is seriously one of my favorite parts of all these books. It’s so cute because the pregnant omegas are so serious about what items they need in their nest and they get all growly if anybody dares move any of it. It usually has me cracking up quite a bit.

I liked Sam and Lu together once they finally came out with their relationship. I loved all the kids. It was good seeing some of the other guys from previous books as well.

A new bit of magic is introduced, something I know will be elaborated on in future books. I wasn’t really sure how I felt about it but I’ll hold off on forming a true opinion until I read more about it.

Overall, I enjoyed this. Unfortunately, I didn’t love it as much as I did the others before it. It was still a nice addition to the series. I’m looking forward to A Handkerchief for Kade, book #5.

My reviews for the first 3 books – 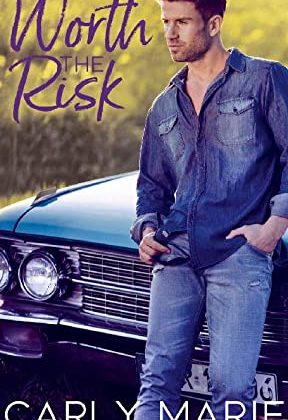