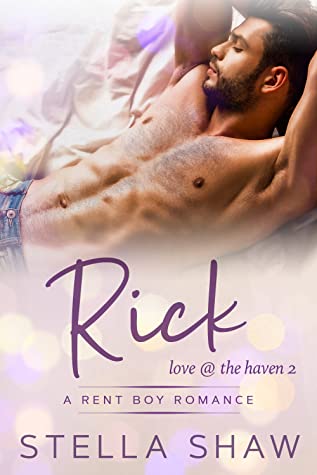 A gift of a man for one night. A promise of so much more.

When Rick Thatcher’s beloved aunt leaves him the run-down Haven Hotel, he’s amazed to find a group of young men running an escorting business out of it. Intrigued and impressed, he allows them to stay. But sacrifices have to be made to keep the hotel running. The hotel is always short of funds, and the guys… they’re sexy, they’re fun, they’re loyal friends. But they can also be a bunch of trouble. Rick has no time left for romance.

Until the night Eliot Walker arrives at the Haven, naïve but brave, looking to discover what it’s like to be an openly gay man at last. He wants to spend the night with a man, one who can excite and guide him. But an escort? He’s nervous of what he’ll find.

He finds Rick. Just the kind of man he’d choose to have his first experiences with, if it was possible. And from Rick’s point of view – on this one special night, and for this one special man he can’t take his eyes off – why shouldn’t it be?

If only this could be more than one night. But their potential happiness and the Haven’s security may already be under serious threat.

A novel in the Love at the Haven series. Each novel is a standalone romance and HEA, but the characters may make brief appearances in other books. And watch out for additional fun short stories in the series.

Book #2 in Love at the Haven is longer at 113 pages than Dante and adds some more depth to the other escorts or rent boys whose stories I’ll be reading over the next few weeks. Meanwhile, you can read these first 2 books as standalones but I think getting a little more about Dante, who has a cameo here, and Rick, the owner of the Haven, is nice but not absolutely necessary.

Rick, whose age I’m fairly certain isn’t given, just like Blake’s age wasn’t given in Dante, is older than Eliot, who is twenty six. It is intimated at, that there is an age gap, and I add it as a tag but I don’t know for sure. My blog partner and I are exactly the same, we both have a burning need to know ages. That aside, I really enjoyed Rick. It was a great follow up to book #1.

Rick was left the Haven Hotel by his aunt when she (recently) passed away. The Hotel hasn’t been used that way for a while. It had become rundown as Rick’s Auntie Pop aged. He used to work in construction but the hotel was a lot to take on and with it came a number of escorts who used the rooms to work their trade and earn some money. Several of them lived there as well. They had a diary system and worked discreetly through word of mouth, no advertising, banding together like a small team. Rick came in and saw an opportunity. Although he was low on cash, Dante helped him organise a loan to fix up necessary structural problems and zhuzh up a few areas to attract and keep more punters. Rick being on the front desk now adds better time management and earning capacity for the guys, and Rick can theoretically earn a percentage and keep the Haven running for all concerned, helping to get the loan down and also maintain the building. The idea is to make it reasonably profitable and to keep his aunt’s legacy alive, while the guys have a safe space to be.

One night a gorgeous younger man turns up as a walk-in. Eliot has a gift card for some time with a Haven escort… and he 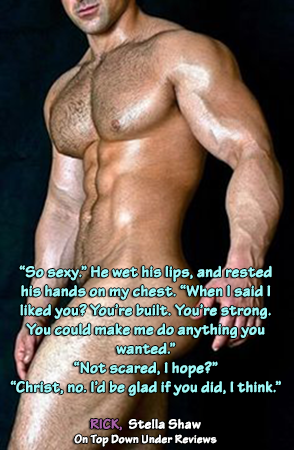 picks Rick. Rick doesn’t sell himself but he can’t resist the shy and inexperienced Eliot. Their time together is magnetic but it has to end as it’s a professional arrangement. But the reader knows it isn’t a transactional night. Both of the MCs think about each other afterwards, until Eliot gets the nerve up to come back and request Rick again. Rick does try to put him off at first but Eliot won’t take no for an answer and Rick definitely wants to be with Eliot.

This is a sexy and sweet book. The MCs are good together. They are nice guys in general. There is a good story going on in the background but I won’t spoil it with those details. Stella Shaw manages a tug at the heartstrings as well as delivering chemistry, sexy times, and lovely camaraderie. Also, Lizzie? You’re a gem! On top of the MCs, it was nice to revisit Arne, looking forward to his story, Tom, Piotyr, Micah, etc. It was also nice to see Dante being such a good friend to Rick and his ex colleagues at the Haven. I like the whole friends as family vibe in my stories and you can build on that more within a series, which Shaw is doing nicely in the “Haven” series.

On to Micah next. If you like escorts/rent boys with heart. If you like a virginal character with a more experienced man, an age gap, this is some very enjoyable, sweet, sexy, intimate reading. 4 Stars!