Finding a missing boy will be hard. Dinner with Shaw’s parents might be murder.

When a rising star in the state senate asks Shaw Aldrich and North McKinney to transport her son, Flip, to and from his drug testing appointments, they’re not happy—they don’t do babysitting jobs. Arriving at the boy’s dorm room, though, they discover that the door has been forced and that Flip has disappeared, and rumors of strange men on campus suggest that something seriously bad has happened. The students and staff at the ritzy private school have plenty to tell about Flip, but the deeper North and Shaw dig, the less they understand what might have happened to the boy.

Then one of Flip’s friends is found dead, and it’s clear that she was killed for coming too close to the truth. As North and Shaw search for answers, they meet resistance from every angle: from the school’s staff, from Flip’s friends, from the police, even from Flip’s family. Someone wants the boy to disappear—and is willing to kill to make sure it happens.

The home front has its share of trouble too. North’s ‘uncle’ Ronnie is back at his old games, drawing North and Shaw into a job that seems simple on the surface—find a missing man who might be in trouble—but they suspect that the request hides something sinister. Ronnie’s involvement, and the job itself, puts the detectives on a collision course with Shaw’s parents and a strain on their fledgling relationship.

As the days pass, North and Shaw realize time is running out for Flip and, maybe, for them as well. They have been misled from the very beginning—and they might be too late. 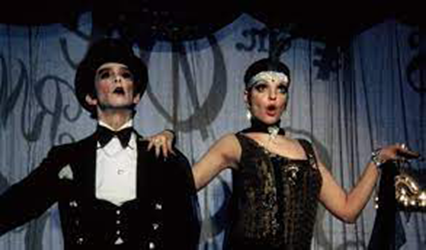 As I read this book I kept singing Money Makes the World Go Around – clearly Liza Minelli and Joel Grey – and not because Shaw and North went Sally Bowles and Master of Ceremonies on me in a German nightclub, no. Rather, money becomes (more of) an issue after they are hired by Senator Chittenden to find her son Phillip ‘Flip’ Chittenden. They have to get into the exclusive The Gouverneur Morris School, one of the most elite schools in the country, where rich kids go to become successful and potentially even more socially connected beings in later life with the right people. Also where Shaw’s wealthy family sent him to school. Shaw and North need to find out how Flip just, poof, up and disappeared, and with all the cameras and security they have in place, too. Senator Chittenden feels the police just won’t be enough to find her golden child. The one who gets straight A’s, who (apparently) everyone loves, who is involved in extra curricular activities…. yadda yadda. Hmm…and who also likes to go off the rails every now and then, smoke a bit of weed, and quite a bit more. And yes, where better to find weed and the other non-mummy and daddy approved extra curricular activities than an upper echelon private school? That Shaw went to The Gouverneur Morris School is a another thread reeling off North who just wants to have plenty of work and make decent money through their investigations firm, Borealis Investigations, and not feel like an imposter anymore.

A rich person, aka Shaw, basically saying money’s not everything doesn’t sit well on North because North knows a few things about life and hardship and not having money – like growing up was tough in a lower socio-economic home, he didn’t have the finer things in life, his neighbourhood was not easy. And as a student at Chouteau he felt like the poor cousin to Shaw, Tucker, his soon to be ex husband, and other well-to-do friends. And now, Shaw tends to dismiss North’s worries about Shaw not running Borealis as a business, and making light of everyone paying, because, you know, money isn’t everything, ‘and maybe some clients are having a hard financial time, North?’ And North finished his degree, goddammit. He’s working hard, but who sees it? It’s money and respect he’s trying to make and create, so why do people dismiss what North’s building? Why do they want to relegate him purely to arm candy or the help or irrelevant? Why does Shaw not see how he feels? North, my dear North. Please speak to someone who can actually help you.

More and more emotional threads fray throughout, and North is increasingly angry and unsympathetic toward these ‘poor little rich kids’ that (he feels) are entitled and remind him of his polar-opposite life at the same age, 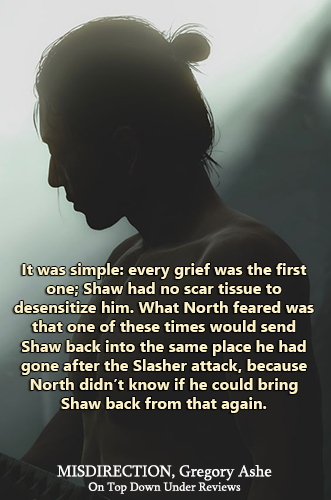 where’s he’s at with Shaw in the here and now. That he’s Shaw’s secret partner is also an issue. That Shaw’s parents think there are better jobs and better people for Shaw to hang out with than North fuels the burn. And Shaw is in Shawland, as per usual, and he does get entitled at North’s expense a tad too often but North’s ability to love Shaw so much that he never wants him to hurt – meaning fear – he wants to protect him more than life itself – more fear. Because of that, North then internalises his own feelings over and over and over again and sets no boundaries, so, you know… shit’s on its way to hit the proverbial fan. But not all at once, oh no. The unravelling will be over the next series books I haven’t yet read.

I loved this book and I was angered by this book. I loved it because the cases they handled were all engrossing, especially the main case at the school. The Chittenden family were something else. They are very true of money doesn’t buy you everything, like class and actual love. The Aldrich Acquisitions case(s) as well were interesting. Especially the lab, cunning as a shithouse rat Uncle Ronnie’s involvement in several intricacies around that as well. However, I’m at the stage where I want to see Shaw and North more settled… and they most certainly are not. They are currently about three steps back. I’d like to think this isn’t going where I think it is with that ending and Tucker still hanging around. North constantly taking Tucker’s calls and nearly getting Shaw into some bad situations because he’s otherwise occupied. That happened in Indirection and then, here, in Misdirection.

“I’m really sorry. About Tucker. About taking that stupid call. It’s like—it’s like he’s in my head, and he knows exactly what to do to make me insane. I can’t even think straight.”

It’s called dysregulation, North. It doesn’t matter that your connection with Tucker is through anger. Anger keeps you engaged when you need to disconnect. It’s an emotion that leads to other things, North, especially when you don’t have much self-worth, and that would be you, along with your other ongoing issues with your father and the pustule that is Uncle Ronnie. Speaking of, Uncle Ronnie should have been dealt with under rule 303 when there was the clear chance. Why yes, I am a vengeful, payback loving kinda gal.
~Sincerely,
Kazza

“Really? North Squidworth McKinney told you that? In those exact words?”

This was a really good book. Gregory Ashe deftly balanced the romance, the psychological, the emotional, and the mystery elements. He hung out pieces that are still to come, making you want to know how it will fall into place. He messes with your head and your heart along the journey. He promises he will do it again and again. He’s sadistic. I hope for not too much longer though. I’d like these guys truly happy in their own uniquely crazy way. However, this is a book review blog but it looks like it’s becoming the Borealis/Shaw and North blog right now, and I need to read other books… but it’s breaking my bloody heart to put them down for a little bit. I love them so much. They feel like they’ve become part of my family. Kingshighway, Barnes-Jewish, they’re cemented in my mental satnav as home. I’ll resume Borealis: Without a Compass as soon as I can no longer stand being away. In the meantime, I can’t recommend this series for the right readers highly enough. I do say “the right readers” for reasons. It’s a complicated relationship with this pair, you truly need a quirky nature and patience, they are exceedingly frustrating. But they’re frustratingly magnificent for the right readers. 5 Stars!