Third-gender operative Dalí Tamareia thought their life as an ambassador ended when they joined a galactic intelligence agency. When they’re yanked out of the field and tapped to negotiate the surrender of deadly bio-engineered warriors who crashed into hostile territory, Dalí is thrust headfirst back into the tumultuous world of galactic diplomacy.

Dalí has faced Shontavians before, but not like these. The stranded mercenaries are highly intelligent and have an agenda of their own. Dalí can’t afford to be distracted from the negotiations by their own demons or the presence of a charming diplomat with a mysterious past.

As a brewing civil war threatens to derail the entire mission, Dalí must use all their skills to bring this dangerous situation to a peaceful end—but the Shontavians may not be the biggest monsters at the table. Someone is determined to see Dalí and their team dead before they discover the brutal truth hidden in the wreckage.

I keep ending up in labyrinthine mazes. There’s a psychological diagnosis in there, somewhere.

On the surface, Bariish displayed its harsh beauty in jagged mountains undulating in parti-colored heaves of red, yellow, and white. But beneath the planet’s landscape lay a hostile, ugly environment. Valuable ore streaked the planet’s crust in tight wires, a coveted material bringing astronomical prices in the open market. Danger lurked in the greed of fellow miners who would just as soon steal the ore someone else coaxed out of the rocky matrix to increase the weight of their own day’s take, and thus the credits received at the end of their stint. Guards maintained a presence in the shaft, but the dark, noisy area contained warrens of tunnels which couldn’t all be patrolled at once.

The heat in the mineshaft stifled me. Vibration from the pneumatic hammer pounded my bones as I chiseled out narrow fragments of rare metal and dropped them into a half-full bucket anchored between my boots. Sweat rolled off my back underneath the protective coveralls, burned my eyes behind the goggles I wore, and noise-canceling headgear formed a swamp around my ears. I didn’t look forward to removing any of it.

Bitter dust rimed my mouth as I leaned the hammer against the stony wall and dug a water ration out of the deep thigh pocket of my coveralls. Heads-up informatics in my goggles displayed the depth from the surface, the air quality, and the time remaining on my shift. Fifteen minutes, all conditions green. I was ready to get out. The claustrophobic awareness of two kilometers of rock overhead remained a constant companion and pressed as heavily as the still atmosphere in the tunnel. I finished the water and picked up my hammer again.

For more than two months, Ziggy and I had been undercover in this illegal mining operation. The first couple of weeks, I did little but register my take with the clerks, go back to our ship on the sandy apron where the rest of the itinerant miners camped, and pick blistered skin off my hands before collapsing into an exhausted coma. The hard physical labor on a planet where gravity was denser than my accustomed Gs proved a new conditioning challenge. My endurance increased each day, but there were limits on the number of hours we were allowed to scrape our take from the mine, and the sound of the warning klaxon brought a sense of relief.

Many Nos, Cthash, and Tolkish drifters worked on the day shift: humanoid, oxygen-breathing species like mine, all drawn by the promise of galactic credits, having left their home systems for reasons of their own. I was the only human in the shaft, night or day. The only one in camp at the time. I kept a low profile, but oddities tend to draw attention.

I hate it when that happens.

A shove to the middle of my back sent me off balance. The powerful excavator danced in an uncontrolled frenzy across the rocks, and I spun, the container of ore threatening to spill. I managed to right it with one heel and shut off the hammer.

Two Nos stood behind me, sneering beneath steamed-up goggles and safety helmets. Tracks of sweat traced pale lines against their grime-covered, glacial skin. The taller of the two thrust a quarter-full ore bucket at me and pantomimed I should empty my take into his.

I’d seen these assholes before. They’d performed the same act with other workers that week, beating the shit out of anyone who refused.

A quick glance around showed no guards close by—not that they would have heard anything over the din of mining activity. I leaned the equipment against the rock wall and capped my ore canister, leaving it inside the alcove where I worked. Empty-handed, I stepped out.

My specialized senses can’t help me where the Nos are concerned. They’re flat nulls, a blank broadcast muffling the spread of my empathic nets, but I’ve come to learn from close work with a Nos crewmate all I need to know is written in their body language.

Tall guy pointed to my bucket again and then to his. Tense, jerky. The smug, shorter Nos behind him stood in a relaxed, expectant slouch. So, he was the one in charge.

I shook my head and crossed my arms over my chest. What are you going to do about it? Excitement sang through my bloodstream, anticipating a fight. The pain of muscle beginning to shift in response to my changeling hormones remained invisible under my coveralls. The ache between my shoulder blades throbbed in a knot of eager, pent-up energy.

The taller Nos shoved his container at the short guy, who calmly took it and stepped back. I used the time to move into the center of the shaft, into the clear space between the magnetic tracks upon which the crew carrier rode.

He swung at me. Here we go. 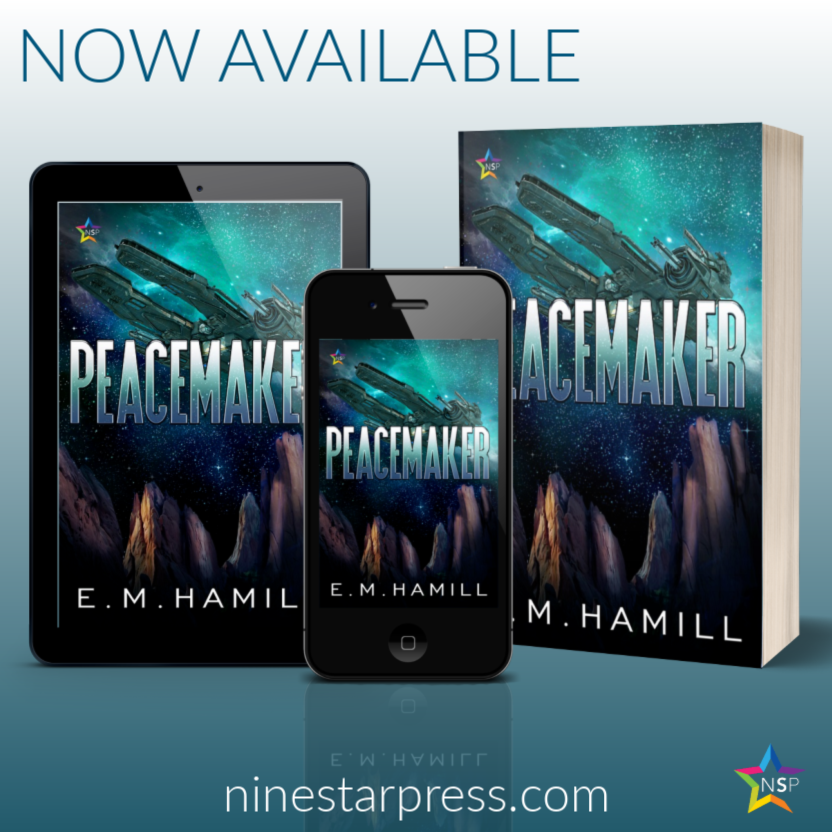 E.M. Hamill is a nurse by day, sci fi and fantasy novelist by night. She lives in eastern Kansas with her family, where they fend off flying monkey attacks and prep for the zombie apocalypse. She also writes young adult material under the name Elisabeth Hamill. Her first novel, SONG MAGICK, won first place for YA fantasy in the 2014 Dante Rossetti Awards for Young Adult Fiction.