Author Hayden Thorne stopped by to help us celebrate our 7th blog anniversary with an excerpt and e-book giveaway for Hell-Knights.

Good luck in the giveaway and thank you to Hayden Thorne for stopping by!

Also, check out another excerpt and giveaway for A Murder of Crows here. 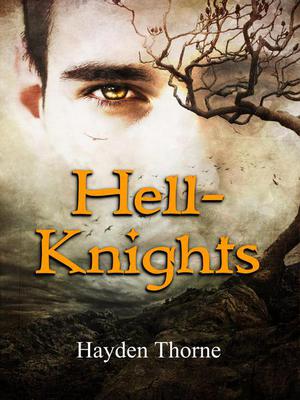 Decima is a centuries-old Italian city on the water, a vanity project meant to be a fairy tale escape for the titled and the privileged. But something in the distant past had turned it into a murky, putrid dreamscape instead, a crumbling city haunted by a scourge of revenants whose origins and purpose now seem destined to be hidden in the shadows forever. Not even the brave, dogged attempts at fighting midnight creatures by the descendants of a select bloodline can rid the city of the near-daily threat.

Michele De Santis is a young minor sorcerer, a reluctant champion who, along with his twin sister and his cousin, has lost too much through the years and has resigned himself to a life of endless midnight hunts while selling healing and protection spells and artifacts during the day. A life of loneliness, of a forced solitude in a desperate bid at keeping collateral damage at a minimum appears to be his only future.

When long-dead corpses suddenly turn without vampire bites, logical patterns no longer hold true, leaving the weary hunters baffled and unsure for the first time. Decima’s bronze guardians fall silent for no reason, a dark, binding spell muting their warnings. A long-abandoned church shows signs of life in the most grotesque ways imaginable. And everything seems to point to an unknown threat, one that’s long lain dormant but has been awakened by the arrival of a young English heir and his amateur antiquarian uncle.

Romance and the gothic layer Hell-Knights with the dark, rich textures of an alternate universe Europe, a nineteenth century world where magic reigns supreme, and love knows no gender.

The chapel stood in the middle of the cemetery, its rotting, moss-covered stone practically held together by nothing more than the ubiquitous vines currently overrunning the graves. It was yet another mystery the vampire hunters—current and past—had yet to solve. Something—magic from the night world—was holding the chapel together, which allowed its underground labyrinth of crypts to remain accessible.

Through the years, as far as Michele knew, minor sorcerers had tried to weaken the magic holding the chapel together in hopes of permanently burying the entrance to the crypts with its rubble. A binding spell could keep the pile of battered stone intact, but the chapel remained impervious to all efforts at stripping its long-desecrated foundation and shell of all infernal magic.

The only thing left for Michele, Evelina, and Ignazio to do was to cast a strong protective spell over the cemetery’s entrance and wall, preventing the reckless, the curious, and the foolish from trespassing and making the fatal mistake of entering the chapel and the crypts below.

“The fog’s changed,” Evelina said under her breath, though her voice still carried despite the volume. “Can you feel it?”
“I can,” Ignazio replied, his tone grim.

“So can I,” Michele added and then sighed, feeling the weight of his birthright press down on his very soul.

A familiar feeling, one he never wanted, never asked for, but the De Santis family was—had always been and always would be—a marked and, therefore, doomed clan, reluctant sorcerers and vampire hunters who had no choice but to answer the call of midnight whenever a revenant rose from its grave. Perhaps it was mercy on Fortune’s part that vampire threats didn’t occur every night, though Michele found nothing but cold comfort in that thought.

“Something’s happening, to be sure. If we can only communicate more quickly and more thoroughly with the other families—find out if they’re experiencing shifts like this where they’re hunting…” Evelina’s voice trailed off when the chapel’s silhouette came into view, barely seen in the strangely solid fog.

“I suppose I’ll try to write everyone again.”

“If only we had a way of communicating with everyone psychically—through magic, even. Charmed messenger animals, for instance,” Ignazio said. “Expedience is, well, rather important right now.”

Michele had to chuckle at his cousin’s sullen complaint. A pretty common one from Ignazio, but it was also a very logical one. That there were a dozen families of vampire hunters covering all of Italy was one niggling issue; another was the fact that their trio of protectors was quite stuck in an island city, and none of them could afford to leave. Michele’s parents’ dearest and most desperate wish to see their children as safe and as far as possible from that isolated collection of weathered stone on dark waters had always been nothing more than that in the end: a wish.

Within moments they stood before the chapel’s doors, the rotting hole where a massive iron lock used to be reminding Michele yet again of previous failed efforts at securing the chapel when tearing it to the ground proved to be impossible.

Ignazio held up his free hand in order to cast a spell, and even in the thick fog, Michele could see his cousin’s ring glow, indicating a vampire close by. In the crypts, as they’d suspected. Ignazio fed his phantom fire another surge of magic, and the ball of light throbbed, burning brightly for the space of a second or two, before reducing its brilliance to one that was stronger than before. Fire and light were part of their ammunition against revenants, and in the crypts, the darkness and chill were damned near absolute.

“Let’s go,” Ignazio said, and the chapel doors opened with a loud groan under his hand.

The phantom fire hovered above and before him, and Ignazio’s spell propelled it forward, maintaining a consistent distance from him in order to allow proper illumination of the immediate area as they moved forward.

The chapel contained nothing but bits of broken, rotting wood on the stone floor and its stone altar in the small apse. The chapel’s windows had long lost their glass, but the yawning openings were also secured with magic from movement—live human movement, that is—entering or leaving the chapel. Revenants were another matter entirely as they could appear and disappear at will, or at the will of whatever noxious power had dragged them back from the grave, in a cloud that smelled of organic rot.

There used to be a large stone cross behind the altar, but it was gone now, perhaps in the process of the chapel’s defiling.

Ignazio led the way to the rear of the chapel, just behind the apse, till they stood before the narrow door leading to the crypts below. The phantom fire floated forward, illuminating the stone stairs that spiraled down twenty-five feet or thereabouts, and then they were all standing at the bottom, fanning out, eyes intent and searching, crossbows at the ready.

Michele glanced at his hand and found his ring glowing brightly now, and for the next few seconds, the three of them simply stood still, holding their breaths as they strained their ears and listened for movement or even the faintest sound. It was their usual approach to the start of the hunt, and while they listened, they also called forth their own powers of protection and strength.

The crypts were really a maze of corridors, with several passageways ending in a cave-like collection of tombs and niches, many of which were used, while some remained empty. The founders of Decima as well as their immediate families were interred in the crypts, while their relatives and a few random families were buried above. Other passageways linked to each other, and some simply reached dead ends. It had been said that the maze was purposefully designed to prevent souls of the departed from finding their way above ground, where they could terrorize residents with insidious hauntings. At the same time, the crypts offered vampires the perfect hiding place aside from the abandoned buildings so common everywhere in the city.

From somewhere in the dark, the faint hissing of a revenant broke the silence.

And he quietly tugged at his bag, dipped his hand inside, and felt around for the three iron crucifixes, two of which he handed to Ignazio and Evelina, the third he took for himself. Taking a deep breath, Michele centered himself, drew forth his powers in another surge, this time using the mental image of a blue-eyed young Englishman to help him find strength.

They plunged forward, not once trying to stay quiet because they knew they’d been sensed. With their scratches and cuts still quite fresh, they were simply drawing attention to themselves, and for better or for worse, it was exactly what they needed.

Several feet into the passageway, a pale figure emerged from the shadows, its gray-white skin sporting marks of putrefaction, its milky eyes wide and blank as though forced open by the magic that had taken over the body. Upon seeing the three, it opened its blackened mouth and hissed again, fangs protruding and gleaming. The vampire floated—hovered—about five feet off the ground, and it bobbed in the air, a horrifying vision of the resurrected dead searching for prey.

Michele, grinding his teeth in concentration, raised his crucifix along with the others. Ignazio’s guiding fire swelled, and Evelina cursed the revenant with a Latin prayer-verse written by the first vampire hunter in Italy’s history. The vampire hissed again, louder this time, and flew back a little, but it quickly became clear it wasn’t the crypts’ acoustics responsible for the vampire’s magnified noise. Coming up behind it, another revenant appeared—half-rotting, bloated, and dripping bloody foam from its gaping jaws.

With a smoothness and fluidity that could only come from years of practice, Michele raised his crossbow with his other hand, dropped his crucifix, steadied his weapon with both hands this time, aimed, and waited a breath till the vampire was close enough. Then he fired, the whispered names of saints and gods following the dully gleaming bolt. 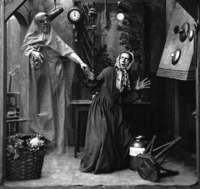