Thanks for having me today! I’m celebrating the re-release of a novella of mine called Evergreen that got…I suppose I think of it as “lost in the shuffle” years ago. It was part of a huge anthology that didn’t sell well and almost no one reviewed, but the few people who did review my story loved it. Evergreen is twenty-thousand words of hard sci-fi about two candidates for a one-way mission to Mars falling in love, and what happens when one of them is cut from the mission following a training accident. Spoiler alert: one of them goes to Mars, the other remains behind on Earth.

But what about them being in love? Why would they agree to separate like that when they’re in love and want to be together? I hate to use the phrase “extenuating circumstances” but really, it fits. In this story, love doesn’t magically make things okay—it just complicates them. But those complications turn out to be a good thing in the end.

Well, if that’s not cryptic enough for you I don’t know what is, so…here! Have an excerpt for putting up with me 😊 Evergreen is available exclusively on Amazon for now: 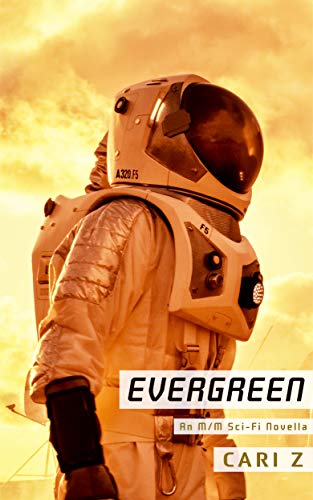 Cy Konstantin and Scottie Andrews are supposed to make Project Evergreen’s one-way trip to Mars together. A near-fatal accident during training knocks Cy into a coma for half a year, and out of Project Evergreen. He works his way back to Scottie’s side, but he can’t rejoin the mission. Once Scottie leaves, they’re destined to live millions of miles apart for the rest of their lives.

A deadly accident on Mars might spell the end of their distant romance, though—or be the thing that saves it.

With regards to interpersonal relationships, candidates are very strongly discouraged from engaging in intimacy with fellow candidates. The training period you are currently undergoing is meant to prepare you for the rigors of life on another planet, and all of your attention should be dedicated to achieving this goal. If your personal relationships become a stumbling block on the path to successfully completing your training, be advised that you may be asked to leave the program. –ISA Project Evergreen Handbook.

Scott Andrews was unique among the military recruits in that he had a civilian family member tapped for Project Evergreen as well. A few of the married scientists were going with their equally competent spouses, but there were no other sibling pairs. Dr. Sophie Andrews was an astrobiologist whose proposal to do an in-depth study on the tantalizing evidence for life sent back by previous expeditions had caught the interest of several pharmaceutical and gene-therapy companies. She and Scottie had worked their asses off to get accepted to the program together. They were far closer than Cyril was with any of his own siblings, and when he heard Scottie talking about Sophie, about how brilliant she was and how amazing her research, he couldn’t help but feel a little jealous.

Not that he wanted to be Scottie’s brother. Not with the way he was feeling.

“She’s already promised to name the first organism she finds after me,” Scottie boasted in the mess hall three months into training. “Cryofilis scottus.”

“You’d think any bacteria named after you would require a lot of hot air to survive, not sub-zero temperatures,” Cyril said dryly.

Scottie pressed a hand to his chest. “Cy, did you just make a science joke at me? I’m honored! Do tell, mate, what other funny little bits of Latin have you got stored away in that big Russian brain of yours?”

“You only get one freebie,” Cyril replied.

“Mmm.” Scottie’s eyes glittered as his lips curled. “Then tell me what I’ve got to do to buy some more, because nothing gets me going like brains and brawn combined.”

Cyril hid his smile. It was harder to do than he’d anticipated. “I don’t think you could afford me.”

“Perhaps not.” Scottie sighed. “It’s not like any of us can afford anything other than our bloody right hands right now. Left hand if you’re Shekar.”

“I like to use both for self-pleasuring,” the Indian recruit said from where he was delicately peeling a tangerine.

“I can’t be happy without my toys,” Mona Brown put in. “Thank god for long-last batteries and solar chargers, otherwise I’m sure I’d go mad on Mars.”

“Once we’re done with our preliminary testing, you can have a relationship again, remember?” Scottie said. “You won’t need toys on Mars.”

“Oh, I figure I’ll always need a little something to remind my lovers how to do it right,” Mona said with a grin, and even Cyril laughed along with the others.

The alarm sounded, and all twelve of them groaned. “That’s it for lunch, then,” Scottie said mournfully, looking at his empty plate. “Off to the gym. I swear, I’ve eaten more bloody chicken here than I’ve had total before in my life. Whole flocks of fowl are giving up their lives so that I can build bigger muscles.”

“It seems a little excessive, given the ones you’ve already got,” Cyril agreed as he stood up.

“Was that another backhanded compliment out of you?” Scottie marveled as he stacked Cyril’s plate on top of his own and placed them both in the autoclave. “Twice in under an hour? I didn’t dare hope I’d get that twice in one lifetime when we first met.” Scottie leaned in close. “Tell me what I did to warrant it, so I can do it again.”

“Oh, it’s not you, it’s me,” Cyril said, letting the obvious sarcasm overshadow his sincerity. “It’s how I get over my psych sessions, I fixate on the nearest jerk and let loose.”

“And whisper sweet nothings into their ear?” Scottie asked, doubt clear in his tone. “I don’t think you’re telling me the whole truth, Cy. Rest assured I’ll get it out of you sooner or later.”

“You’d have to put it into me first,” Cyril deadpanned, and Scottie’s laughter echoed through the empty mess.

“Did someone replace you with a new model when I wasn’t looking?” Scottie wondered. “Are you an android after all, and did you get an upgrade? I must say, I like it.”

They were alone, the flirtations were tantalizing and for once, Cyril felt like he might be able to hold his own. Then Sergeant Malloy came over the comm. “If the two of you aren’t in the gym with the rest of your squad in the next minute, you can both look forward to wind sprints before dinner this evening.”

Scottie paled. “Not on your life,” he muttered, and headed quickly for the door. “Quick, Cy, before she changes her mind and halves our time!”

Moment lost. Cyril sighed and ran after Scottie toward the gym. 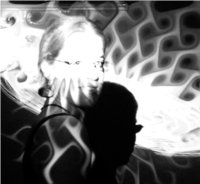 Cari Z is a Colorado girl who loves snow and sunshine. She likes edged weapons, prefers books to television shows, and goes weak at the knees for interesting men and exciting explosions (but not at exactly the same time—that would be so messy).

You can find her at carizerotica.blogspot.com, follow her on Facebook as Cari Zee, or on Twitter as @author_cariz. She has several novels available on Amazon as well, please check them out and leave a review!