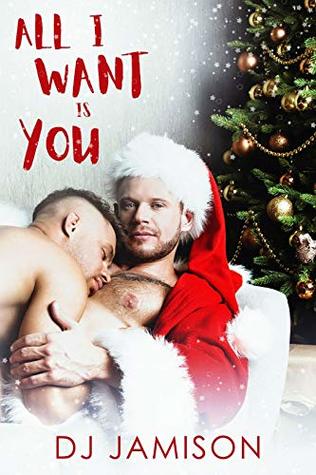 One kiss under the mistletoe destroyed a friendship. Will another Christmas kiss remake it into something better?

Eli hasn’t been home since he left at eighteen with a heart aching from his best friend’s rejection and his father’s intolerance. But when his father reaches out, Eli figures it’s time to make peace with his family. He doesn’t expect to come face-to-face with Turner too — or to learn that the straight friend he’d foolishly loved is actually bisexual — but once the shock wears off, he knows exactly what he wants for Christmas.

Turner’s life isn’t everything he’d once planned, but he’s happy to be the shoulder his loved ones lean on. They keep him busy, which is just as well since none of his dates have really clicked. He hasn’t been able to connect with anyone the way he did with his former best friend. When Eli shows up for the holidays after years away, Turner doesn’t know what hit him. But he knows one thing: This time, he wants to give Eli a reason to stay.

All I Want Is You is a friends to lovers, second-chance romance with an HEA.

I love a good friends to lovers story. Eli and Turner were best friends most of their lives. That ended when Eli, who was openly gay, kissed Turner under the mistletoe when they were eighteen. Eli’s father, aka Coach, was hosting his annual Christmas party for the track team when Eli took a chance. He’s regretted it for eight years. Turner didn’t handle the kiss in the best way, and worse, he kissed a girl shortly after. Eli tried to stay friends with him but he pulled away, knowing it was the best way to guard his heart. Then when Coach, who was very much against having a gay son, made an ultimatum, Eli left home and never went back. He and Turner stayed friends for awhile on social media, but even that changed when Eli couldn’t handle watching Turner with this girl and that one.

Turner has pretty much always known he was bisexual. What Eli didn’t know the night of the kiss under the mistletoe was how bad Turner wanted to kiss him back. He didn’t because he’d watched what Eli had gone through when he came out. While he stood by Eli, and dared anybody to bully him, he wasn’t willing to go through the same thing his friend had. 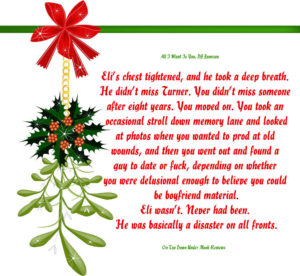 It’s now eight years later and Eli has come home. He’s just been laid off from the non-profit LGBTQ youth shelter he’s worked at for four years. His (now former) boss encourages him to go home to visit his family. What Eli doesn’t expect when he arrives is to see his former best friend/crush, Turner, all over the place. Coach is laid up with a bad knee so Turner has kind of taken over at the school and around Eli’s parents’ home – shoveling snow, helping around the house, etc.

Somebody outs Turner to Eli before he can tell him he’s bi. Of course, this hurts Eli’s feelings. Now he’s thinking that not only did his so-called best friend not trust him with the truth when they were younger, but he didn’t kiss him back under the mistletoe because he didn’t see Eli the way Eli obviously saw him. His feelings hurt, he tries to pull away from Turner but Turner’s not having it. He’s waited all these years for another chance with Eli and there’s no way in hell he’s going to let him go again.

This was a solid 4.5 to 5 star read for me. I was enjoying watching Eli and Turner dance around each other when it was obvious they wanted to be together. The sex scenes were good, and they seemed to work as a couple both in and out of bed.

So, what happened to make me drop my rating?

Or should I say Turner’s reaction to Desiree.

Turner is openly bisexual, as I said. I applaud the author for making his bisexuality a big deal in the story and not just brushing it off because he was in love with a man. But… there’s showing the reader that Turner is bi, and there’s shoving Desiree and her boobs and ass in the reader’s face. If it was just those things being shoved in our face and nothing more I would have let it go. What seriously bugged me about this story was Turner’s reaction to Desiree. Not only did he openly ogle her, but he was openly flirting with her in front of Eli. There was even a little whispered conversation out of Eli’s hearing. Not just that. They set up a coffee date – again, in front of Eli. That last part wouldn’t be a big deal if it wasn’t for the other stuff and the fact that Turner and Desiree were friends with benefits. This is mentioned more than once in the story before and after that little meeting. Knowing this, the so-called coffee date sounded exactly like they were setting up a booty call in front of Eli. Whether that was the case or not, I don’t know, and it doesn’t matter now. A perfectly good story almost died for me in that very moment. That same perfectly good story dropped a couple of stars in rating for me in that very moment.

Everything was going perfectly, so I’m not understanding why all that was even necessary, unless it was to prove to the reader that Turner WAS bi? Had I been Eli – forever in love with my best friend or no – I’d probably be running back to California just as soon as I could arrange it. Then, later, Desiree walks into Turner’s office at school and he’s thinking about how sexy she is or something along those lines. Geez, enough already.

Don’t get me wrong. I loved these guys together. They belonged together. I even loved almost all of the rest of the story, except Eli’s dad. I loved watching Eli and Turner reconnect and finally get it right this time. I enjoyed reading about the town and the secondary characters.

I don’t usually have a problem with M/F sex in gay romance books like some readers do. But I do have a problem when one of the main characters is openly doing what Turner was doing while also trying to prove to Eli that he’s not the eighteen-year-old kid who pushed him away. To me, it was a slap in Eli’s face, especially after the mistletoe incident 8 years prior when Turner went from Eli’s kiss under the mistletoe to straight to kissing a girl under mistletoe.

The story was good, and again, I loved these two guys together. However, sometimes all it takes is one thing in a story to kill it for me for one of the characters. After Turner disrespected Eli like that with Desiree, there really was no coming back – not for Turner or the story.

There’s an epilogue that takes place a couple of years later. I’m a sappy romantic so I loved how that played out. I even found myself liking Eli’s dad a little bit.